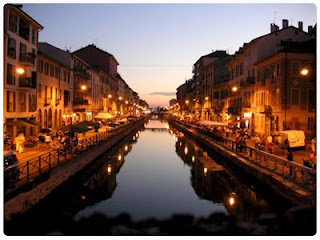 Milan was an absolute revelation! Completely unlike anywhere we've been before. It's a real working city that keeps its treasures quietly to itself unlike say, Rome or Venice, which have their wares conspicuously on display around every corner. You have to WORK at Milan, rifling through the side streets and the guidebook to unearth delights which reveal themselves unexpectedly, like the cool green courtyards glimpsed from the outside of four-square, hulking buildings. Milan is turned in on itself, but in a good way, and we loved it! The Duomo square is, of course, spectacular and the Galleria Vittore Emmanuel II fascinating in its unashamed slavery to image and expense, but the things we enjoyed were a little further off the beaten track: the Navighlie area, Bohemian bars with lavish buffet snacks looking out onto the canals (yes! Milan has canals); the darting, wheeling house-martins around the 4th century basilica of San Lorenzo alle Colonne; the jasmine hedges that lined the streets near our hotel; the pasticcerie with their displays of tarts, cannoli and barquetini.
We did make it up to Lake Maggiore: the weather improved rapidly throughout the morning of day two, so we hoofed it to the station and found ourselves on the 12.43 Domodosula (sp?) train and disembarked at Stresa. It had got hot, so we were content to stroll along the panoramic promenade taking in the (only slightly misty) mountain and lake views, stopping for a cold beer and paddling in the icy waters. After arriving back in the centre of Milan in the early evening, we had a minor restaurant crisis. This involved seating ourselves in an interesting looking place near the canals (recommended in the guidebook!) asked for the menu over our aperitives and found....NOTHING we fancied eating!
The evening before we had gone to a lovely restaurant and sitting in the vine-hung courtyard, eaten local specialities such as osso buco and risotto Milanese (made with saffron, totally delicious). This canal-side restaurant seemed to have had...shall we say an 'Experimental Chef'. Finding that there was nothing that the children would even contemplate (and they are good, hearty eaters) we made our excuses and sidled out after settling the drinks bill. By this time we were really hungry as we'd last had a sandwich on the train up to the lake many hours ago. It's never good trying to decide on where to eat when you're tired and hungry, plus the restaurants were fewer and further between than in Rome. We ended up walking a couple of miles to one that the Husband had read a favourable review of in the 'cheapies' section of our book, but we were SO glad we did! Named L'Oca Giuliva (The Happy Goose) it was an homage to all things goose-like. Small, with dark wood cabinets housing the desserts (typically Italian), cosy tables, goose figurines and images everywhere, and a most attentive maitre d' who seemed to come from another era in his long white apron and neat moustache. The food was gorgeous, none too expensive, and the wine copious and intoxicating. We must have spent sufficient as the waiter brought us a digestivo on the house before we wove our way, via the metro, to our hotel. Alas, it was over far too soon! But we decided there and then that we most definitely WOULD be returning to Milan before too long.
Posted by Hypatia at 8:08 AM No comments: