The Easter school break is dragging on for another week. There is absolutely no need for it: Easter sunday was over a week ago - we have celebrated accordingly, and now it is really time to get back to our daily routines. And teachers bemoan their lot!
Actually, Daughter #3, having competed in a race on the River Weaver near Runcorn in Cheshire, has gone down with a very nasty bout of tonsillitis. In fact, she was so poorly yesterday (Sunday) that I took her to the walk-in NHS clinic where we waited for nearly two hours, only to be told that she had a viral variant of the disease that would not benefit from antibiotics. When we emerged, the lovely sunny day had dissolved into a cool and blowy grey one. We had spent the best part of the day surrounded by the city's drug users who seemed to have all run out of their prescriptions at once!
The Husband is back at work today, mute with misery and apprehensive of a thankless day of stress and chaos. he seems to be missing his spring dose of foreign travel and, to that end, has been browsing the budget airlines for cheap fares and trawling Europe for city-break destinations. Valencia seems promising, but there is a dearth of reviews upon which he likes to base his decisions. By the time he decides we're going, I imagine the cheap flights will have been snapped up. Still, half the fun comes from the planning, and I'd be quite happy to go back to Rome again, or Barcelona, or Venice, or anywhere....
Because the girl was poorly, we failed to make it for the intimate meal we'd promised ourselves (no-one wants to look after a germy kid, nor would we expect them to) or have a fun day out on our last day together. We ended up spending the day pruning the grapevine back severely and spending a good couple of hours chopping the branches up into small enough lengths to fit in the green wheelie bin (they didn't all go in). I kept thinking of the passage in John's Gospel 'I am the true vine and my father is the vine-dresser: every branch that beareth not fruit in me he taketh away, and every branch that beareth fruit he purgeth that it might bear more fruit.' Well, if that's anything to go by, it'll be bearing grapes a-plenty! Still, it's done now and the whole area is a lot lighter and airier, as is next-door's garden, which fell into its shadow. It's one of my pleasures to sit under the vine in the summer and read, with a glass of wine to hand (not from our fruit, unfortunately), something I hope to do into extreme old age.
Posted by Hypatia at 9:07 AM No comments: 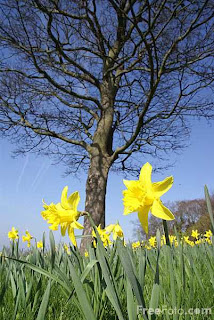 We are heading into the Easter weekend, which I think is a lovely time of year. The daffodils are blooming, the blossom on the cherry and on the pear tree is about to come out, the little garden birds are picking up whisps of dry grass for nesting and the sky is a deep blue with wind-whipped, scudding white clouds. In fact, today is extremely chilly too, and the weather forecast suggests that snow may be a possibility in the very near future. The Bright-Eyed Boy certainly felt the lack of a hat on his walk to school today!
I am relishing the thought of a few days rest and relaxation: I've been working pretty hard on my thesis and although I don't seem to be making conspicuous progress (ie the word count is growing slowly), I feel deep down that I am getting somewhere with it. There's still so much to do, and I have a German assignment to complete, but I intend to take some time off studying. It seems to be dominating my every thought and move at the moment, and I am constantly aware that I am carrying around a mental list of things that need to be done and books that need to be read. I feel infused by the whole project, which is something that I simultaneously both enjoy and resent.
The Husband is thoroughly looking forward to a week off work - his job is so stressful and busy that a few days respite should return him to sanity - at least temporarily! He's decided to join the gym again which is a good sign: recently he has seemed too exhausted to motivate himself to do anything other than work and sleep. We shall have to make some time for leisurely meals and family trips out. I really want to go and see the forthcoming 3D version of Clash of the Titans, it reminds me of my childhood favourite Jason and the Argonauts, which largely formed my interest in Classics and the ancient world. Daughter #3 has a rowing competition this weekend which takes place a couple of hours distant. We shall load up the Dog and take her too, as a good walk by the river will blow the cobwebs out of her whiskers. When the sun was shining last Saturday, the Dog took herself out into the garden and lay down in the only small patch of sunny grass, just under the pear tree. Roll on the summer when she can lay full-length and sunbathe until she gets so hot that she has to move, panting, into the shade.
Posted by Hypatia at 1:35 AM No comments: